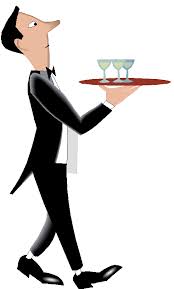 How do you feel about tipping? Are you happy to reward a well-done job or do you have more of a Mr. Pink attitude toward gratuities?

A pair of recent Slate articles got me thinking about tipping. The first is pretty straightforward and makes the case that tipping at restaurants should just be banned (Tipping Is an Abomination, Jul 9).  The argument is that the practice is bad for customers since it leads to uneven treatment and bad for workers since it allows employers to pay absurdly low wages. But what happens when a restaurant simply eliminates tipping? That is the topic of the second article written by a former restauranteur who did just that (What Happens When You Abolish Tipping, Aug 14). In lieu of tipping, the restaurant added an 18% service charge to the check. Thus it pricing was more like an auto service station that breaks out its labor charges from the cost of parts.

The primary reason for the switch was to have greater equity between the front and the back of the house.

We made this change because we wanted to distribute the “tip” revenue to our cooks as well as our servers, making our pay more equitable. Servers and cooks typically made similar base wages—and minimum wage was the same for both jobs—but servers kept all the tips, which could often mean they were taking home three times what the cooks made, or more. In California at that time, it was illegal to distribute any tip money to cooks. (Recent court rulings in the Western U.S. have loosened that restriction somewhat). By replacing tipping with a service charge, we were legally able to redirect about a quarter of that revenue to the kitchen, which reduced the income disparity and helped foster unity on our team.

Now one might wonder why implement a price increase through a service charge as opposed to higher meal prices. (And let’s be clear: This is a price increase. Although generous tippers might get a break, what the firm — as opposed to social convention — says has to be paid has gone up.) The author says they wanted to a transparent system that would be comparable to a conventional restaurant. However there may be a little more to it than that. Higher prices would be shared with staff in the form of higher wages. But if that sharing is solely in the form of higher hourly wages, then you have to pay those even on a slow Tuesday evening. If, on the other hand, sharing is done through an explicit service charge, then labor is still relatively cheap on Tuesday but gets (and earns!) a premium on Friday.

So what was the outcome of eliminating tips? Did service fall go to hell?

When we switched from tipping to a service charge, our food improved, probably because our cooks were being paid more and didn’t feel taken for granted. In turn, business improved, and within a couple of months, our server team was making more money than it had under the tipped system. The quality of our service also improved. In my observation, however, that wasn’t mainly because the servers were making more money (although that helped, too). Instead, our service improved principally because eliminating tips makes it easier to provide good service.

The article goes on to argue that service improved because, well, that argument is a little fuzzy…

if you work somewhere other than a restaurant and with your clothes on. They’re a well-established way of compensating people, in part because if you don’t have to always think about money, you can focus on doing your job well. Software engineers, marriage counselors, bridge builders, you name the profession—in almost every industry, it’s expected you’ll be able to do your best work if you’re not constantly distracted by compensation issues. Why don’t we want that for restaurant servers?

I say this is fuzzy because it is not what any standard economic argument would predict. In a standard model, an agent can exert effort to increase some output (e..g, patron satisfaction). If you tie the agent’s pay to that output, the agent puts in more effort. Why should that break down here? For one, there is relatively little direct connection in the US between quality of service and size of tip. Most of us just do some rough math in our head and slap down a tip independent of whether service was merely passable or truly outstanding. So the basic connection between effort and reward assumed by economists is just not there.

So why should service improve? I can see several reasons. First, frontline customer service is generally a team effort. Letting everyone share in a the rewards of a busy evening means that each individual has an incentive to help out other servers. In a more eat-what-you-kill regime, there is not much reason to help out across tables.

Second, this is in many ways a better deal for servers. Waiters eventually made more as business went up but even before that earnings should have become more predictable. As I have written about before, pooling tips reduce variability in earnings that are driven by things beyond a server’s control. For example, a couple that simply doesn’t drink is never going to order an expensive bottle of wine, and there is no amount of salesmanship that is going to change that. A waiter doesn’t control whether they are serving teetotalers or partiers. If tips are pooled, such vagaries even out across the whole staff.

Third, the service charge still aligns the incentives of the staff with those of the firm. The restauranteur wants to turn tables; she wants diners to enjoy their experience; she wants customer to come back. Giving staff an explicit slice of the firm’s revenue assures that they also care about these things.

By Marty Lariviere, from: http://operationsroom.wordpress.com/2013/08/27/should-restaurants-eliminate-tips/