Justifying the IT Budget: the Cost of Not Spending 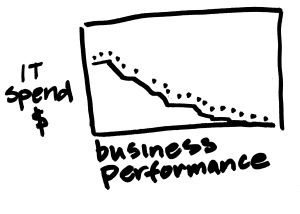 “Competitive and ever-increasingly sophisticated in the marketplace[1]” describes a company positioned for long term business survival. Complacency takes the business nowhere but into irrelevance-land, which I think we can all agree is not where most business owners wish to end up… it makes selling the company slightly more challenging. Even in markets which were once firmly held to be localized are now open to new – and new kinds of – competitors, due in most part to advancements the development of information technology (IT) as well as how it is applied. These days, competition is globally facilitated rather than locally, and it’s becoming the standard approach. Welcome to the cloud.

New paradigms in IT capability an

d use are spawning huge shifts in what were broadly recognized normal or traditional business approaches. This realization has created the need for businesses to radically change their view of IT investment and the value of IT within the organization and operation. Yet IT is rarely an area which gains a strategic focus for investment within most businesses, and is frequently considered to be like a pencil or a particular chair… something the business needs but which has little impact on the company’s ability to compete better. Au Contraire, Mon Frère: Information technology is at the heart of business competitiveness, but justifying the desired investment is the great challenge. Maybe it’s because the focus is always on the great benefits to be achieved with the spend, rather than looking realistically at the impact of not doing it well or at all. Especially with information technology, there is a large potential cost to be paid for not spending adequately.

While business operations are sustained through IT involvement, economic pressures continue to weigh down business interest in funding IT operations. (which is weird, as there is a lot of evidence that the good bet is on those who do just the opposite). This regular spending reduction and cost control plan has good intentions of reducing the overall cost of business operations. The unfortunate reality is that operations are less efficiently sustained and are even more frequently unable to create or manage any level of growth. Reducing all IT spending is only useful when profitability is also improved and quality is maintained, unless it is an effort to simply stay afloat as revenues decline (and it’s recognized that quality will decline as well). But reducing costs does not help the business seeking to remain competitive in a rapidly changing marketplace, and pulling the pins out of the department primarily responsible for at least keeping things currently in operation operating serves only to chip away at the once-solid foundation. It’s a real problem, this difficulty with increasing interest and justifying increased funding for business information technology. And it all stems from the inability of organizations to clearly and with tangible benefit cost justify the investment.

It is this justification – demonstrating IT investment as a strategic asset presenting an advantage over competitors and positioning the business for future success – which requires effort and analysis to fully describe. Information technology is not a set of servers and software, and it is not websites and portals. It’s not click thru rates or SEO scores. Well, it’s all of that, but it is none of that. There is so much to consider and incorporate, and there are many degrees of success which might be experienced along the way. Information technology is a fundamental requirement in each and every business, and dependency upon it is increasing at a startlingly rapid pace, yet we still can’t quite figure out how to put it all on paper with provable numbers.

It might be easier to forecast in little departmental or functional pieces, but that doesn’t provide a total picture of the enterprise. And it’s often really difficult to quantify the impact of not doing something, or doing it only OK rather than really well. When this data does present itself, it often comes too late and in the form of a comparison to the competition, revealing where the business just didn’t meet the mark as compared to others in the same space.

It all boils down to businesses coming to the realization that information technology investment must be made on a continuing basis. The justification for IT funding must be made, and that justification must necessarily be balanced against the potential implications and impacts of not implementing. This is the only formula which can ultimately describe the value of IT investment in the business.

By Joanie Mann, from: http://coopermann.com/2014/06/24/justifying-the-it-budget-the-cost-of-not-spending/

Joanie Mann is a recognized authority in the areas of ISV cloud enablement and ASP service delivery. Her extensive work with accounting professionals worldwide has positioned her as an expert consultant and adviser to practitioners looking to leverage cloud accounting solutions, web-based applications and Internet technologies in their firms and with their clients.See Joanie’s articles on EPM Channel here.