Can You Guess the World’s Fastest Growing Economy? (No, It’s Not China) 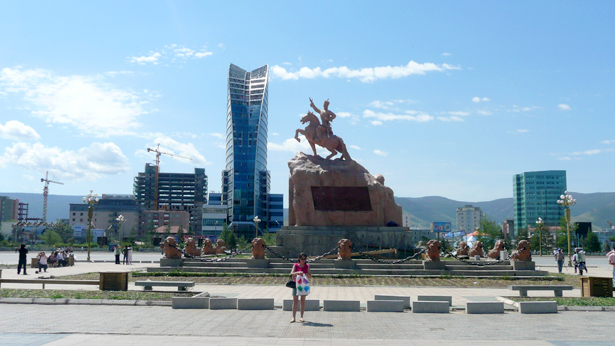 Mongolia is part of a new class of countries that, like the Middle Eastern states that got rich selling oil to the West, have hitched their economies to resource-hungry China.

If you can make your way into the VIP room on the second floor of the Louis Vuitton outlet in Ulan Bator — it’s near the Burberry store, but the Burberry in Central Tower and not the one at theforthcoming Shangri La resort hotel — you’ll be handed a glass of champagne and asked to gaze upon a special, gem-encrusted saddle made just for this store. It symbolizes “the fusion of the brand’s travel heritage and Mongolia’s tradition of expert horseback riding,” according to a Louis Vuittonpress release, and it includes a special container for carrying caviar across the same Mongolian steppe that bred Genghis Khan.

This is the new Mongolia, and it doesn’t always look like the old Mongolia. The ancient ways are still here — though the yurt-like gers that have littered the steppe for centuries now sometimes carry satellite dishes and solar panels — and why shouldn’t they be? Neither Chinese nor Soviet dominance could change Mongolia’s famously nomadic, individualistic culture. But, now that it has the world’s fastest growing economy, according to NPR, no one is quite sure if Mongolia’s breakneck transformation will prove for the better.

Mongolia’s rise is about Mongolia, but it’s also about an otherwise minor global player that has been pushed and pulled with the fates its two powerhouse neighbors — China to the south and Russia north — and rises or falls along with them. Mongolia was a dictatorial, underdeveloped disaster in its 70 years behind the Iron Curtain. Finally democratic and free market, it was perfectly positioned to join China’s ascent, but also China’s risks.

A miner looks over Oyu Tolgoi mine, a mark in the Gobi Desert that produces $5 billion in coal every year. (Reuters).

Mongolia has vast natural resources — copper, gold, uranium, and perhaps most importantly coal — and few citizens among whom to divide the spoils. Though it’s over three and a half times the size of California, it has a population of only 2.7 million people, fewer than live in just the urban center of Fuzhou, China’s 30th largest city.

With China’s increasingly insatiable appetite for exactly the minerals that its norther neighborboasts in abundance, Mongolia is joining a small class of once-impoverished Asian nations that are getting rich by selling to Beijing. Kazakhstan, which was never as Borat portrayed it but wasn’t exactly Vienna either, has financed a gleaming glass capital and a nationwide modernization byfeeding Chinese energy demands.

Countries like Kyrgyzstan and Uzbekistan are building their economies on China’s import market. It’s hard not to think of the Persian Gulf states that sold enough oil to the West to transform themselves, in only 50 years, from heavily nomadic and illiterate societies into countries so rich that they have a problem with too many Ferraris on their streets.

The problem is that Mongolia’s wealth is not sustainable. If the Chinese economy takes a sudden downturn, as it might, the Mongolian economy could shut down almost overnight. Even if that doesn’t happen, there’s no question that one day, maybe in 50 years or maybe in 20, the coal mines will empty.

Children play with a balloon in front of the Mongolian capital’s gleaming Parliament building. (AP).

Now that so many Mongolians have abandoned their rural, from-the-land lifestyles to crowd into the rapidly growing capital city, they’re dependent on the mineral economy. Many of them may not have an old way to return to should the new way fail them. And with inflation so high, a hard landing could be severely painful.

So, if Mongolia is profiting off of a Chinese version of the same model that made Middle Eastern oil exporters so rich, then it faces a similar challenge: to invest that money into more sustainable industries so that it will have something to fall back on when the buyers go away or the resources run out. There’s nothing wrong with Mongolians enjoying the fruits of their new success, but if they put all of their money into gem-covered saddles, then Mongolia’s first golden age in centuries could be short-lived.

By Max Fisher, from: http://www.theatlantic.com/international/archive/2012/07/can-you-guess-the-worlds-fastest-growing-economy-no-its-not-china/259877/

Max Fisher is an associate editor at The Atlantic, where he edits the International channel.