If you want to find the U.S. states and regions with the brightest future, look west. Gallup analysis shows that the West North Central, Mountain, and Pacific regions are likely to be the best areas to live in 20 years, based on the strong economic, health, and community foundations they are building today.

The combination — or lack — of strong economics, good health, and vibrant communities positions regions for the future.

The best place to live in 2032 will have tackled unemployment, financial worry, healthcare costs, obesity, and education challenges. It will be a place where most residents are healthy, optimistic, employed in good jobs they love, and enthusiastic about their communities.

But community and business leaders, take note: The future of your community, state, or region isn’t sealed. You can adopt important concepts now that can influence your area’s chances of being the best place to live in 20 years. Here are some specific suggestions for turning these ideas into action.

To see into the future, Gallup examined 13 forward-looking metrics encompassing economic, workplace, and community factors as well as personal choices that might predict future livability. (For details on these metrics, see the sidebar “How Gallup Computed the Rankings” at the end of this article.)

The West North Central region, which includes Minnesota, Iowa, Missouri, North Dakota, South Dakota, Nebraska, and Kansas, is the region poised for the brightest future. Workers in this area are most likely to be employed full time for an employer in the type of good jobs associated with high GDP. Residents have the highest economic confidence in the nation, setting the region up for a strong economic future. They are also the most likely to report easy access to clean, safe water, meaning that this region is best positioned to address one of the critical resource challenges of the future.

The Mountain region, which includes Montana, Arizona, Colorado, Idaho, Wyoming, Utah, Nevada, and New Mexico, comes in second, buoyed by the lowest obesity rate in the nation and the most widespread access to safe places to exercise. The Pacific region, comprised of California, Oregon, Washington, Hawaii, and Alaska, comes in a close third, with the lowest smoking rate in the nation, quality workplace relationships, and the highest percentage of residents who say they learn new and interesting things daily.

The combination of strong economics, good health, and vibrant communities positions the West North Central, Mountain, and Pacific regions for a bright future. For other areas of the U.S., though, the future is not so bright. The East South Central region, which includes Kentucky, Tennessee, Alabama, and Mississippi, trails on several critical metrics and performed worst overall of the nine regions. People in this region are the least likely to be employed in good jobs or to learn new and interesting things daily, and they have the lowest economic confidence. They are also the most likely nationwide to be obese, to smoke, and to lack a safe place to exercise. That’s a killer combination, and it won’t help this area build the productive, healthy society of the future.

Beyond the overall rankings, regions also show differences on key measures. The West South Central region, which comes in fourth overall, has the highest score in the nation on the Job Creation Index. Residents are also the most optimistic about their standard of living, with 54% saying that their standard of living is getting better, compared with 30% who said it is getting worse. This region also does best in future life evaluation and city optimism, which suggests that there is positive momentum for the future.

Similarly, 23% of people in the East North Central region are smokers, compared with 16% in the Pacific region. This sets up the Pacific region for significantly fewer incidences of lung cancer, emphysema, and heart disease down the road.

When it comes to water quality, 6% of residents of the West South Central region say they lack access to clean water. This is twice the 3% of residents of the West North Central region who say the same. That amounts to a difference of 1.1 million people who don’t have access to clean water at a time when it is expected to become increasingly scarce worldwide.

Workplaces are also a critical component of working Americans’ everyday wellbeing, and they provide the economic energy of a community. The Pacific region leads in this category: 58% of workers characterize their relationship with their supervisor as a partnership that fosters productivity and an entrepreneurial spirit.

The Middle Atlantic region scores the lowest on the Supervisor Relationship metric. It also has the lowest city optimism and Job Creation Index score of all nine regions. 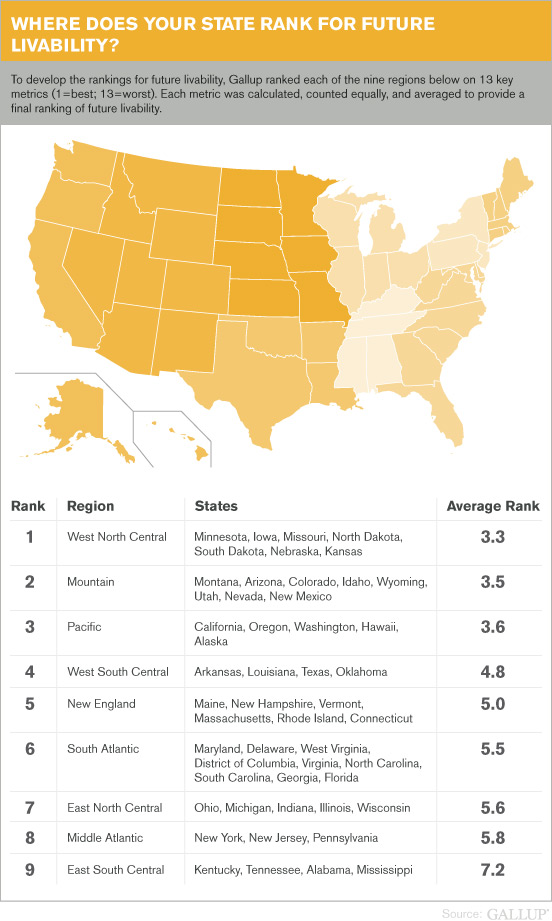 What leaders can do to make their communities more livable

The future fate of these regions isn’t sealed. Any community that can create good jobs and engaging workplaces while fostering better health habits and a sense of optimism about the future still has a chance to be the best place to live in 20 years. To this end, community and business leaders can implement proven initiatives that can make a significant difference in the future livability of any community. These actions could be directed by a mixture of private and public partnerships with a united sense of purpose and promise.

The future livability of any community will be based on, among other things, its commitment to an entrepreneurial spirit, an informed and active citizenry, and a sense of shared commonwealth.

The most critical element of any community’s future livability might be a culture of successful entrepreneurship. Successful entrepreneurs consistently demonstrate a willingness to take risks, but they also have the resolve to start and manage a business. They exhibit a thirst for new ideas and innovation while demonstrating a willingness to act on their ideas and modify their business models over time. They demonstrate a competitive, energetic, and highly motivated business ethic, but they also must maintain a calming presence in times of crisis and uncertainty.

Above all, entrepreneurs create jobs. Research has shown that communities with high wellbeing enjoy lower unemployment rates. People who are employed demonstrate healthier behaviors and better physical health than the unemployed, and workers who are engaged in their jobs are healthier, more productive, and exhibit higher overall wellbeing than those who are not. Indeed, the relationships among an entrepreneurial culture, job creation, and wellbeing have never been clearer.

So what can leaders do to make their communities more livable? Many tangible, cost-effective, and proven forms of intervention can spark the entrepreneurial-based, wellbeing-driven cultures that can become the vanguards of future livability:

Cities can also play a key role in encouraging and promoting their livability by:

Above all, communities can encourage healthcare, business, political, and education leaders to form a visible task force. Its purpose would be to share common goals; monitor and discuss measures of success; and provide a sustained, unified message of how the community will achieve its aspirations. Ultimately, the future livability of any community will come from its commitment to an entrepreneurial spirit; an informed and active citizenry; a sense of shared commonwealth;

and a lasting promise to the long-term economic, physical, and social wellbeing of every resident.

Dan Witters serves as the Research Director of the Gallup-Healthways Well-Being Index.This daily assessment of U.S. residents’ wellbeing provides real-time measurement and insights needed to improve health, increase daily productivity, enhance basic needs, and lower healthcare costs. A researcher at Gallup for more than 20 years, Mr. Witters presents regularly at wellbeing-related conferences and summits around the country. His insights from this research appear regularly on Gallup.com and in the media.